Not an update worth writing home about, but an update nonetheless, with what little significance it brings. I guess this is a giving of voice, however small, to a defiance of sorts – a flail and a flinch that says I’m not quite ready nor willing to throw the towel and let the blog die just yet, notwithstanding the curveballs life has been throwing me of late. The great difficulty with the issue of blogging, at least for me, is that blogging – or more specifically writing – is for me immensely beneficial and stimulating, but also demanding of a synchrony of time, place and mood – mental room and solitude – that is getting harder and harder to achieve nowadays. One is tempted more and more to say “this isn’t working out, I’m busy, there is much to do. Better to put it down with finality than to have it forever hanging on my conscience – always desired but rarely reached”. At least for the near future, the plan is still to hold out somehow until the next time I am able to find the right spirit, topic, time and place to write a good blog.

Anyway, back on topic. I had the pleasure of looking up the lyrics of this song recently – the second ED of that great series Fate/Zero. It was wonderful. Suffocatingly beautiful. Almost poetic. And as usual, not being satisfied with available translations that I’ve found, here is my own. Reflect on Kiritsugu and Irisviel as you listen – their romance and ideals. And then in the backdrop, the ideals, the passions, the efforts of the many other participants of the Fate/Zero stage – how they burned bright and intense, to eventually fizzle and fade, but not without first adding heretofore absent illumination to the Fate/Zero whole.

Merry Christmas from Between Linux and Anime. May the dream never cease to light our horizons, and may our weary steps thereto never falter for long.

Hit F8 to listen to it while it’s up (or play it from the player at the sidebar). Hit the jump for some pictures, Romaji lyrics, and translations.

END_OF_DOCUMENT_TOKEN_TO_BE_REPLACED 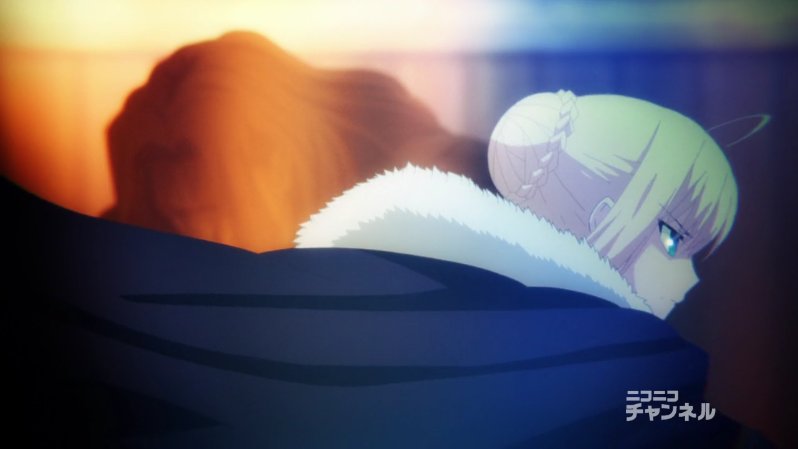 I finished Fate/Zero some time ago and enjoyed it immensely. It was a very dense show with a lot of rich, inter-weaving ideas – so much so that a detailed treatment is probably an impossibility for a single post. But I still want to write a little on it, in part also to hopefully build some momentum for tackling more difficult post topics later on. So I’m going to focus this post on Saber – a single thread in Fate/Zero’s yarn, but one that is I think quite wonderful and radiant. Hopefully I’ll also be able to pivot on that to say some general things about Fate/Zero itself – the kind of show it is like.

END_OF_DOCUMENT_TOKEN_TO_BE_REPLACED

So I decided to resurrect Anisong of the Season. Fall 2011 was an overall pretty awesome season with plenty of great music. It felt like almost every show had an OP, ED or both worth sitting through – Tamayura, Last Exile, Chihayafuru, Guilty Crown, Mirai Nikki, even the idolm@ster songs got better in the second half. So I was left with the happy problem of actually being spoilt for choice for Anisong of the Season, in contrast with the season before where I basically just gave up because I didn’t particularly like anything.

In the end from among my favorites of the season (Which included tracks like Memoria of Fate/Zero, Starboard of Last Exile) I chose Oath Sign, the ringing, beating OP for Fate/Zero. Fate/Zero was to me the best show of Fall 2011, head and shoulders and waist, and Oath Sign just had that certain “just right” quality to get you into the correct mood for the show every time, almost on the level of what Bouken Desho Desho did for the original Haruhi. The spectacular animation sequence that accompanied it and LiSA’s rough-and-raw rock-out style only added to the awesome. Loved it, love it. I only hope that the new OP that would in all likelihood surface for the next half would be as awesome. It’ll be a long wait :( Especially since, Nisemonogatari awesome notwithstanding, Winter is thus far looking like a really dry season compared to what we got in Fall.

(Random insert: why does Last Exile 2 appear to be so off-the-radar, at least among the aniblogs that I follow? That stuff ended up something I would consider top-three material even in the stacked season that it fell in, and yet no one seems to be murmuring a word about it. Weird.)

So anyway, here’s Oath Sign by LiSA. As usual, you can hit F8 to listen to it while it’s up, and hit the jump for a picture, Romaji lyrics, and translations. Enjoy.

END_OF_DOCUMENT_TOKEN_TO_BE_REPLACED

What can I say, it’s a phenomenal season.

For those who missed the previous (and first) brainmarks post, here’s a little FAQ thing:

Q: …”Brainmarks”?
Picture the entire season’s offerings swirling around in a state of interminable chaos in your feral brain. Now picture fishing a number of shows out of that mess and pinning it up neatly – marking them for further exploration and investigation. That’s making brainmarks, and that’s what this post does for you. As a bonus I even rank them. And yes, I like inventing words (remember photoogling?).

Q: Aren’t you just jelly about Blogsuki’s aptly named “Thin-slicing” posts?
Why not at all. Whoever gave you that idea? *whistle*

Q: Uh okay. So basically any show that appears here is great, and any that doesn’t sucks?
Well, no- maybe. Lousy shows obviously won’t show up here, but I may give shows that use mostly recycled material/strategies a pass as well, even if they are relatively well done and entertaining. Conversely, not so well executed shows that do something interesting or that show potential for interesting development may show up, but there is of course no guarantee those won’t go quickly to the shitpits. Basically the most relevant metric here is “potential interestingness”.

Q: Shouldn’t this really be called “Jason moofang’s guttural nearly-arbitrary ranking of nearly arbitrarily selected shows” then?
No- well…
…
Fine, be that way.

I know I’m late as hell, but I guess that’s becoming normal :( It does mean that I managed to watch at least 2 episodes of all the shows I’m going to list though, so hopefully that somehow translates into better perspective and depth :)